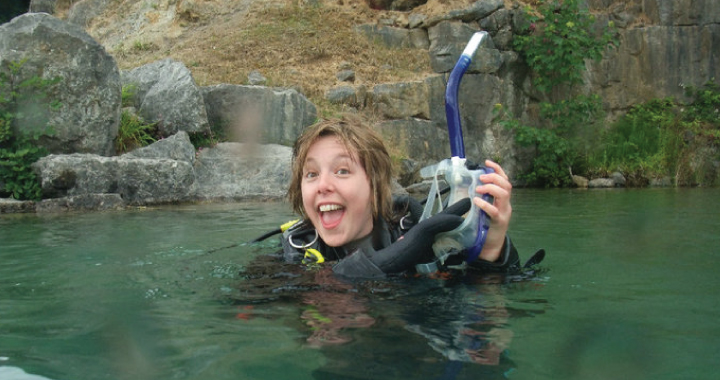 My love of diving started over a decade ago. I took my Open Water Course in Egypt in 2005 and from the moment I blew my first bubbles, I knew I was going to be an instructor.

It took me a long time to get there, though. I’m ashamed to say that before I reached professional levels, I was very much a warm water diver. Throughout my early twenties, I was very lucky to have amazing holidays in some of the best dive destinations in the world. On every holiday I took my next course – Advanced in Thailand, 2006; Rescue in Bali, 2007 and a few fun diving escapades in between. But for whatever reason I missed out on all my local diving spots – most likely lack of confidence and not knowing the right people.

It wasn’t until 2009 that I took my first steps on the professional diving ladder. At that time, I was a Design and Technology teacher. I was a couple of years into my first job at a… how can I put it politely… challenging secondary school in central Newcastle. I found myself feeling stuck in a rut. I loved teaching and I loved working with kids. It was all the behind the scenes stuff that frustrated the hell out of me – the constant scrutiny, having to tick boxes just to prove you were a good teacher and the increasing levels of stress stopping you from doing your real job. (This could be a whole blog on its own.) 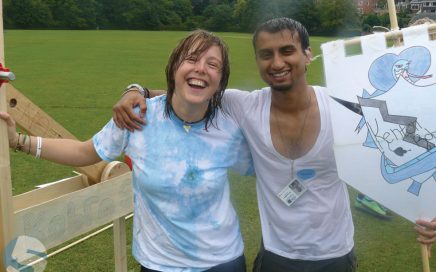 I needed to get underwater.

It’s funny what effect it has on me. It doesn’t matter what kind of stinking mood I’m in, as soon as I'm submerged I’m cured and I come back up with a massive smile on my face.

To satiate my cravings, I signed up to Gap Year Divers to spend my 6 week summer holiday in Andros, Bahamas. This was a volunteer program, living in a small camp and diving every day to carry out fish counting surveys on reefs around the island. Alongside that, I also signed up for my Divemaster course.

My First Taste Of The Beach Bum Lifestyle

The camp was basic - sandfly infested, dorm rooms with bunks and no mattresses, porridge for breakfast, ramen noodles for dinner and beans for tea. Every.Single.Day. But my god, it was amazing.

I learnt how to take care of the camp's scuba gear, including disinfecting it with vast amounts of Dettol. Even now, whenever I get a whiff of it's distinctive smell, I'm transported back to Andros. Remembering Adrian teaching me how to fish under the milky way, watching for shooting stars while waiting for a bite. How the best shower was the one from the gutter outside Colours Bar when it rained. The hours we spent sitting in the kitchen testing each other with fish ID flash cards. And the downtime days where we travelled to nearby blue holes for somersaults and swimming.

The diving was fantastic. Heading out on our own little boat, the Chiccharnie, to pristine sites with amazing viz and sharks. Spearfishing invasive lionfish - which are without a doubt the best tasting fish I’ve ever eaten (although anything tasted better than porridge and beans).

As we were diving in a remote location, we were banned from drinking, except for Saturday nights. I appear to have made it my mission to compensate for the weekly alcohol drought as my bar tabs for just one night regularly reached the $200.00 mark. I blame Fire In The Hole (the local rum); Adrian, Mitts, Gabes, Jen, Tilly and Ian; the bar owners Karen and Timmy and the marines who were stationed on the base around the corner... 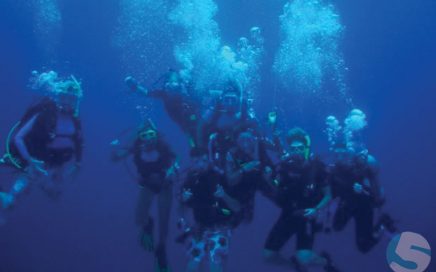 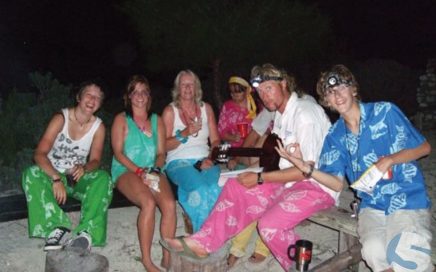 My instructor and mentor, Siobhan, guided me through the Divemaster program. She taught me tips and tricks which I could practice diving every day. It was the first time I felt real confidence in my diving ability.

Taking The Plunge Into Cold Water

The Bahamas made it even more obvious that I was on the right track to the perfect career. I returned home and within a few weeks I was at a PADI members forum, armed with hand made business cards, trying to meet people from the local scene.

This is where I encountered two of the nicest and most generous people I've ever had the pleasure of meeting - Rob and Nic Mackins. Without them I’m convinced that my professional diving story would have been a non-starter. Back then, they were in the early stages of setting up a new dive centre in South Shields - Arbeia Diving. The next weekend, I was in the shed outside their house, humping tanks and fetching regs to fill up the ex-sunshine club bus for my very first pool session. (I just liked playing with the wheelchair ramp). 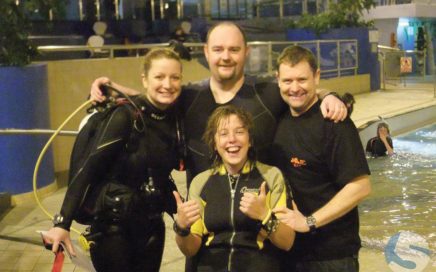 I thought I knew it all already...

How wrong I was. Throughout 2009 and 2010 I was Arbeia’s DM whenever I could. I took my first dives in cold water, in a dry suit, with real students. Every dive I learnt something new about control, technique, problem solving and judgement.

I have extremely fond memories of working with Arbeia. Like when I learned diving and wasp stings don't mix. It took the strength of 4 grown men to stretch my dry suit wrist seal wide enough to get my swollen hand out. 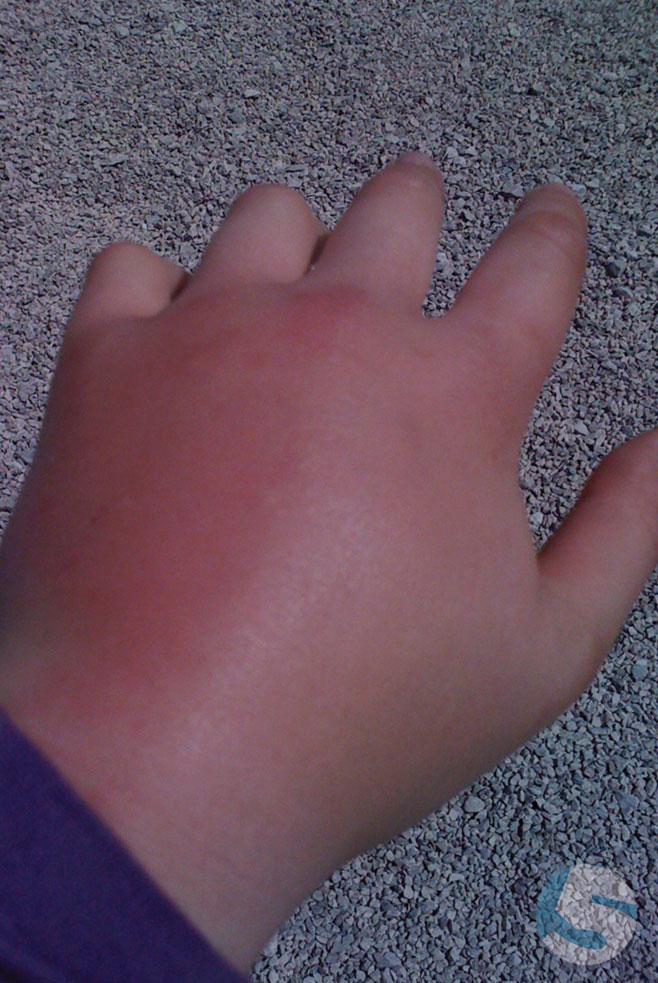 Or when we all joined the British Divers Marine Life Rescue as Marine Mammal Medics so we could attend to poorly seals and stranded dolphins at all hours of the day and night. 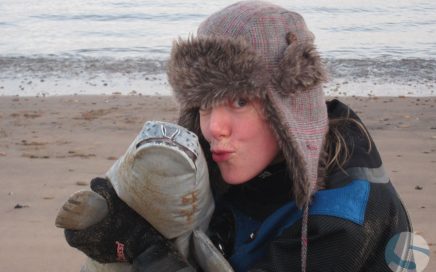 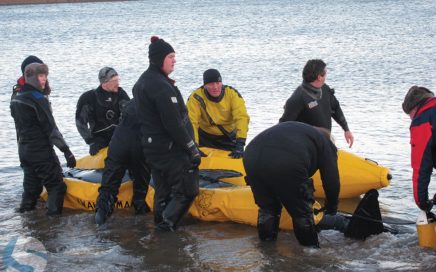 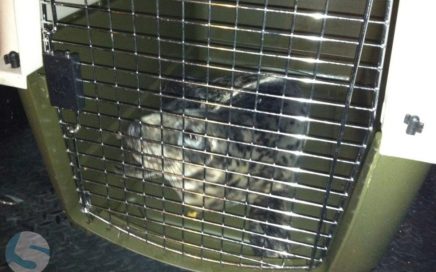 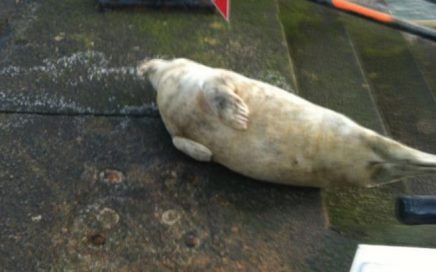 And that summer I got bent just before the 6 week holiday so I had to do shore cover all season and earned my nickname Bubbles. 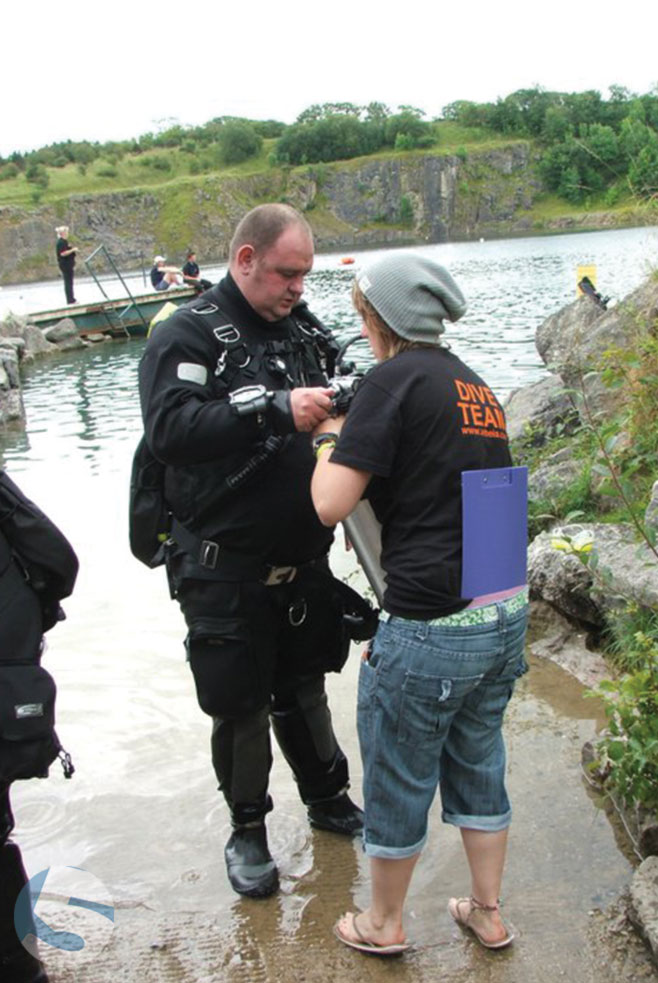 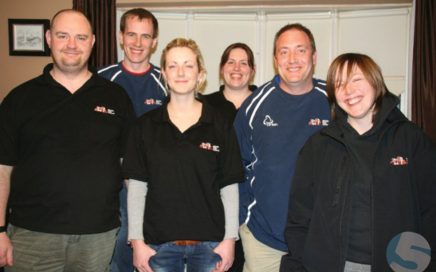 I met a whole host of interesting members of the diving industry. When Arbeia first started, Natalie (or Jarjar) was a young instructor working with Nic and Rob. She became somewhat of a role model to me. Her teaching delivery was calm and knowledgeable and her skills underwater were brilliant. She’s a fantastic diver and now has more tec and cave quals under her belt than I could ever dream of. 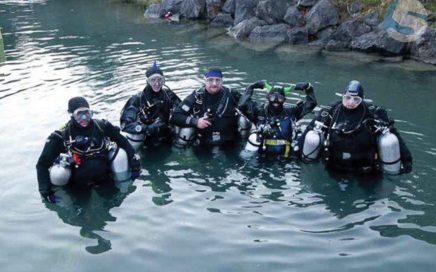 During our numerous visits to inland dive sites, I got to know Alex Varnals - a PADI Course Director and owner of Scuba Leeds. I’d always have to hide my credit card when he was around as this dude can sell ice to the eskimos. I dread to think how much money I exchanged over the years for cameras, dry suits and thermals. All the while I was taking notes - and I hope my sales technique lives up to his. His winning formula boils down to being genuine and knowledgeable lad with a massive passion for diving. Simon Sinek is right – people don’t buy what you do, they buy why you do it.

Varnals introduced me to Sidemount diving long before it was popular. He was one of the few Sidemount instructors around at the time and I learnt some amazing skills to add to my growing arsenal. The course made me realise that diving is constantly evolving and how important it is to be ahead of the curve.

It’s also where I met James...

But it wasn’t exactly love at first sight. He looked like a 12-year-old boy. Mind you, I was still getting ID’d for lottery tickets at that time too… 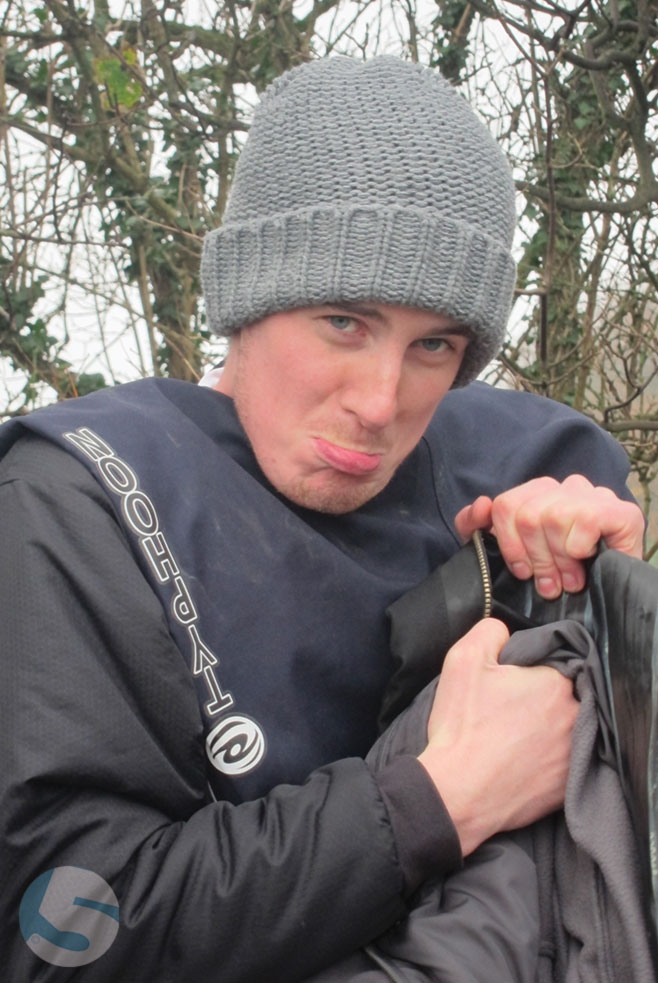 The Arbeia team worked tirelessly to get out of Nic and Rob’s shed and into a unit in South Shields. Rob called in favours from all his mates to get the unit and portacabin fitted out and ready for teaching. When I wasn't helping James waterproof the roof or installing the suspended ceiling, I was working on logo design and shop front display. 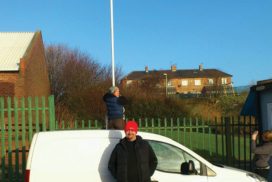 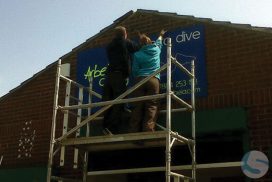 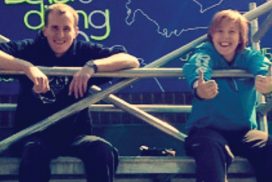 The business continued to grow, as did the following and once they thought I was ready, Rob and Nic encouraged me to get on an instructor course so I could be of more use!

Stepping Up To Instructor

In September 2010, I embarked on the most intense two weeks of my life. I did my IDC with Gary Mawston at Aquanorth in Newcastle, the most experienced CD I’ve ever met. Under his guidance and along with his fantastic team of staff instructors – Jan Mawston, Ken Cooper, Chris Bishop, Mick Randle from Reefers and Wreckers and my mentor Chris Ball (who now runs the centre at Bonair Hotel Harbour Village) I passed my exams and made it to OWSI with a long list of specialties.

I continued working with Arbeia and loved every minute. So much in fact that I found diving was taking over my other hobbies. I used to play for Newcastle Ladies 1st Hockey, but I gave it up so I could dive every weekend instead. 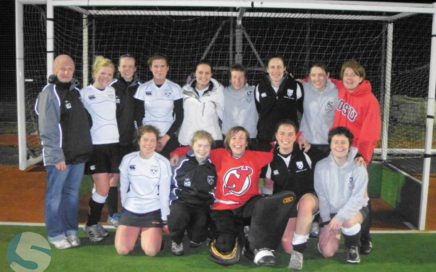 I also started to realise that I loved teaching diving more than teaching technology. A once in a lifetime family holiday to the Maldives put the final nail in the coffin. After spending time with the resorts instructors, I was very envious of their lifestyle. I made the decision to apply for a year long sabbatical and applied for every instructor job in every country I could find.

Read the rest of the story... 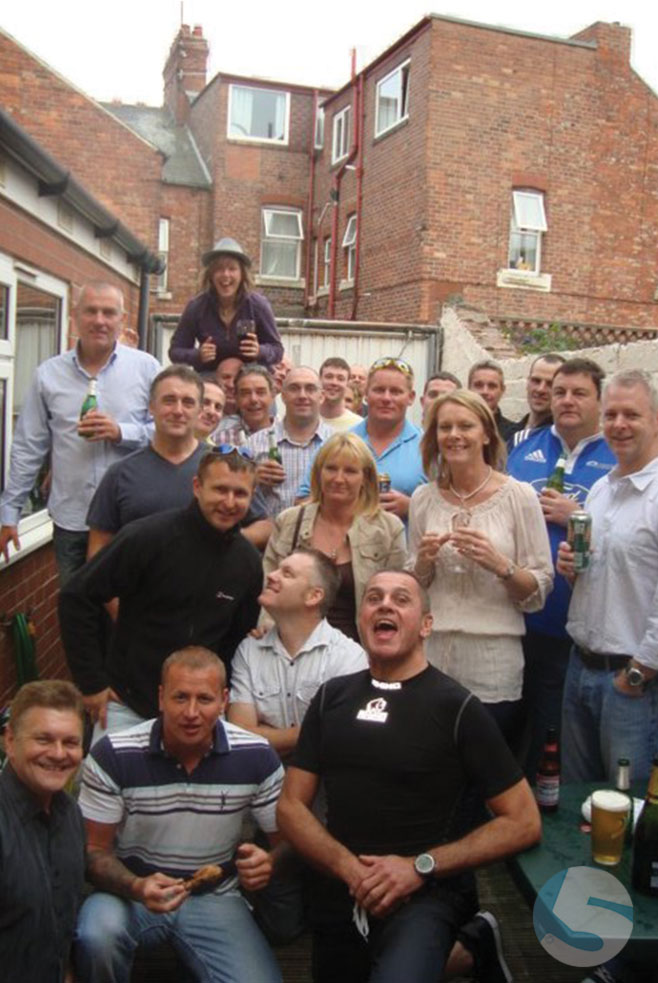